FairCoop is counting on its monetary innovation, FairCredit, to build a new, more equitable and globally efficient economic system, resulting from its complementary relationship with Faircoin and the work of FairCoop and its members.

Its expected release date is Spring-Summer 2015. 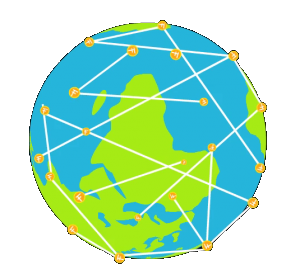 This is our blueprint: FairCredit is the monetary system of mutual credit globally supported by Faircoin. It serves as a vehicle of economic exchange and credit expansion and contraction among FairCoop members, thus reducing the need to spend Faircoins and deepening its store of value function, while also providing better mechanisms to promote credit and economic exchanges.

The requirements for participating in FairCredit are the same as those for being a full member in FairCoop.

Unlike Faircoin, FairCredit is only accepted within FairCoop, and cannot be used for buy/sell transactions with individuals or companies that are not members of FairCoop.

With this, the economic system promoted by FairCoop will use several currencies with complementary functions, as explained in Building a new economic system.

To facilitate understanding of the proposal, we’ll use the following terminology:

The level of credit available to each user will depend on several factors, which the computer system will be responsible for automatically calculate:

FairCredits can be converted to Faircoin at any time, on the condition of saving them for a period of time. These Faircoins would come from a Faircoin cash fund especially created for FairCredit, which in turn could come from the Pool Fund managed by the Ecosystem Council.

At the same time conversion mechanisms will be implemented to allow, yet discourage, FairCredit withdrawal from the FairCoop system if needed by FairCoop members to meet cash necessities. This exchange’s margin can be used, for example, to extended the cash fund until the initial payment can be reused for another project.

One more element to consider before launch is possible mechanisms to allow users to deal, through FairCredit, with personal or collective emergencies related to basic needs such as food, water, shelter, health and education.

FairCredit is therefore a project that incorporates lessons learned from various disruptive monetary theories and our own experiences. With Faircoin and FairCredit we hope to contribute to society with a more ethical, equitable and sustainable economic system.
More about mutual credit systems:

Mutual credit, or mutual exchange systems are a logical evolution of community-based bartering. They have been driven by organizations and social groups in various forms for the last 30 years, though earlier examples can also be found.

A local exchange system uses no-interest loans for money creation. When two accounts make the first move, one of them records a positive balance, the other one, negative. This ‘overdraw’ is not debt, rather it is necessary to create money with a decentralized social currency.

For example, someone could participate in this economic system by performing an activity, for instance, a babysitting job, and get paid for it, generating a positive balance in their account. This can be spent on carpentry services from other partner system, which will pay for this positive balance. Account balances act as currency. All economic transactions are collected online, in a location open to participants in the system so that it is transparent to them. This monetary system can also be called mutual because beneficiaries of the network are the same people who work in it.

As we have seen in the case of FairCredit, it will be a mutual credit system, though evolved to allow credit expansion and shrinking among participants.