Summoning to a meeting for Integral Cooperatives and Solidarity Economy
Mouzaki, Karditsa, 5-6-7-8 of May 2016 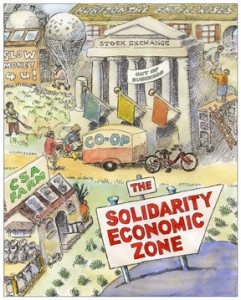 We live in an era in which it is becoming clearer to everyone just how cruel and inhumane the centralized power and economic establishment system is. Moral values, democratic achievements and lives are being lost in chaotic turns of events, both locally and globally. All this is happening around us, in a social context of the deafening silent acceptance of most of the people who are witnessing it. For some, it might all be seen as just part of a planned development within the increasingly reactionary capitalist development model we are following. In whatever position we are, whatever point of view we share, certainly we cannot ignore the grave situation that has been created and which concerns us all.

Recognising that the way capitalism has been manifested for so many years has only served the purpose of plotting a steady course towards disaster, we have decided to take things into our own hands. We can join up with grassroots energies, both collective and individual, that are based on the fundamental values of direct democracy and cooperation, and try to create an alternative path. We need to talk and communicate to agree and work together on issues that affect us all, in society in general and across the planet as a whole. We realized that we have the power and the will to start building a post-capitalist reality and a society by means of the participation of everyone for the common good.

The proposal we have made and the implementation plan we propose is based on the concept of Integral Cooperatives. Some may have already experienced or have heard of the Catalan Integral Cooperative (C.I.C.), or FairCoop, the Earth Cooperative for a Fair Economy, which together promote Integral Revolution. Basically it is a self-management model which, through economic (and political) disobedience creates an integral, direct-democratic community and social system based on solidarity, proximity and trust in the members of the community.

Many tools have already been developed, both local and global, allowing us to organize and operate outside of the authoritarian and oppressive establishment, recovering control of our own lives step by step. Starting from the financial sector, where we are able to implement an autonomous, alternative and distributed economy, using digital currencies. Similarly, there are numerous proposals and examples of self-organized projects that appeal to many other needs, such as work, agriculture, health, etc. The purpose is to collectively organize a common basis for cooperation and to network all these individual efforts, and so work together towards a visible and extensive dynamic self-management system.

A vision like this is not possible without openness and inclusiveness. We acknowledge the diverse initiatives and movements which are already creating networks in order to make this a reality – for example the solidarity economy initiatives in Greece – and want to extend a special invitation to them work with us to get togetherr and build this new social economy together.

So for all these reasons we invite you to begin planning and helping us to realize the new world we envision!

To know more about the integral cooperative movement in Greece and our recent news, we invite you to take a look at https://cooperativas.gr/

Here you will find the relevant application form where you have to fill in some key elements in facilitating and organizing our meeting. Participation will be free, and we will try to support the expenses of people who can not afford it. Fill the form in order to register for the event.

See the entire program here: https://fair.to/u2xgh
Be involved in the content’s building here: https://titanpad.com/mayevent2016
The knowledge and tools exist. It is now time to make a decision and move on.
With coordination, organization and especially strong will we can do anything!