We start a series of posts with the aim of showing you what local nodes, the territorial extension of FairCoop, are doing. This is for two reasons: After a year and a half of hard work, we are extending our presence through new places and it has been an amazing experience that we want to share with all of you. The second reason is to show you where we are active so that all people interested can join and participate in this new economy, and if there is not yet an active local node you can start one.

We begin with the Galiza Local node, one of the most active nodes in Spain. 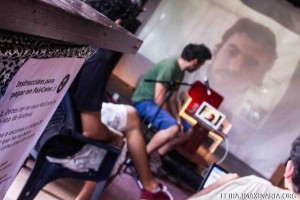 We started this node from the connections that were happening among activists in the Imaxinaria network for Galiza and northern Portugal. Some activists are from la Casa Colorida in Nigrán, Alg-a, SPG A Gavela, Sede and A Praça. Most of us are already involved in the FairCoop project. After some meetings and based on the knowledge we had on cryptocurrencies, alternative economies, integral revolution and social/cultural activism, some of us started to take some action towards integrating FairCoop’s model in our social context, mainly in the local area of Nigrán-Vigo (southern Galiza). Our first presentations/talks about FairCoop in Nigrán and in the Commons Festival in Porto aimed to involve more people in those local areas. We also had a sucessful presentation in the social market fair in A Coruña (northern Galiza) with about 20-30 attendants. We ended this presentation with the promise of more practical workshops in that town.During this first phase, we found people were always curious and motivated, but at the same time overwhelmed with all the tools, implications and potential of the FairCoop ecosystem. This made us doubt about real implication, but at the same time, the use.fair-coin map has in Galiza many collectives already into the knowledge of FairCoop, so we aimed to recreate real use of this economy and started thinking about ways to go further.

After some months of talks and presentations, we organized our first collective experience in the use of Faircoin during the Feira Imaxinaria in 2015 summer. This main Free Culture event in Galiza was the perfect spot for activists and curious attendants to start using this coin. During two days about 15 people used Faircoin to buy food, artisan beer and drinks. The experience was overall interesting, and we engaged many people to start using their mobile wallets. But we needed more.

This experiences and our motivation to begin a real local market based on Faircoin and on Faircoop’s principles, led us to design a bigger plan to help stablish spots around Galiza that may use and integrate our model in their product sales and services. Our knowledge about social networks in our region is that the most related spots to begin could be consumer cooperatives, for they already integrate their own network of conscious users, producers, activists, etc. and also they are already into ethical consumption, economy, degrowth, and sustainable ways of living. The idea is to try to activate first a consumer cooperative and motivate some experiences inside it. The second step would be, through their network, to reach some other stores or service providers.

Last month we had this presentation in Zocamiñoca, the Consumer Coop in A Coruña, where most people seemed quite affine to the objectives and again motivated with the potential. This time, the discussion went deeper into the practice of trying to set up an alternative market, and showed us some new points to try and solve together: Dealing with the difficulties that organic food producers would have in integrating themselves in this model if they are needing € to produce their goods, and how VAT taxes need to be inserted in the Faircoin price for them not to lose money in this transition. Another doubt related to the legal issue of declaring their sales or not, and also to accounting. After some thoughts we decided to open a collaborative pad where all of us could discuss the best ways to have some products in faircoin at the coop’s store and maybe in the fairmarket. About three to four people seemed to be engaged in collaborating with us for this local spot and are now organising a second encounter where we can gain the collective intelligence to solve these doubts and barriers and find a proper way. It seems very promising. We also realized that the chance of having some of the people that have been driving experiences in Greece in an online meeting could help this process a lot.

It is now a matter of time and motivation to go on with this plan and try to reach the ability to run a small local market in this town. This would be good also to motivate more local spots to begin with a similar process.

To know more about the Galiza local node you can find them in Facebook and in the Fairnetwork.
If you want to get involved in the activities going on in your local area, just register on the Faircoop website and join the Fairnetwork, search in groups your nearest local node and join. If there is no local node near you, you can start one!